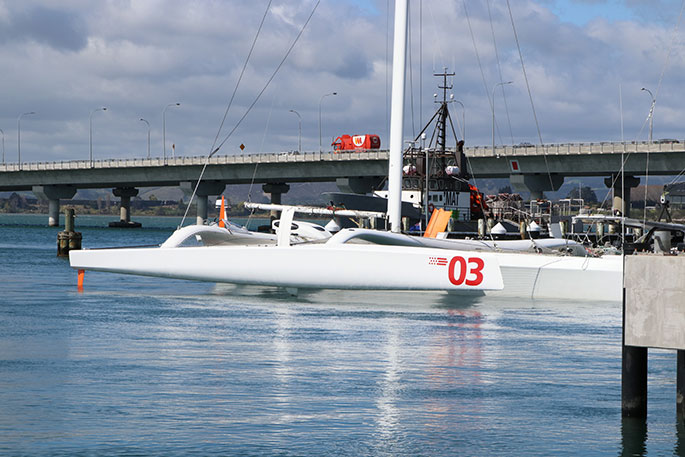 The MOD 70 Trimaran is getting work done at Vessel Works in Tauranga. Photo: Daniel Hines/SunLive.

A vessel described as the royalty of ocean racing is in Tauranga this week.

Beau Geste is a MOD70 Trimaran skippered by Gavin Brady.

Vessel Works project director Phil Wardale says the vessel is in town to “undertake some maintenance”.

“It arrived so late, the crew had to sleep on the vessel, as they had to be cleared by customs before coming into the harbour.”

Brian says there is not much room on these sort of boats, and the crew would have slept on banks in the hull of the vessel.

“It’s one of the fastest boats in the Southern Hemisphere. It is sailed by professional crews.”

Karl Kwok bought the MOD70 designed trimaran in August 2017 and they are now based in The Yard on the Brisbane River.

Brian says these boats sail all over the Pacific.

“Tauranga has also had a pretty good reputation for being effective, efficient and friendly place for big boat maintenance.

“But now we have the Marine Precinct with the big boat lift, the craning out facilities and the rigging experts, it’s becoming a more favoured destination for overseas boats to do refits and maintenance.

“It’s really good for the industry in Tauranga.”

Karl bought the yacht from Lloyd Thomburg when it was called Phaedo3.

Phaedo3 (originally Foncia) launched in August 2011 and had a reputation of being one of the fastest yachts in the world.

Some of the records it set included: