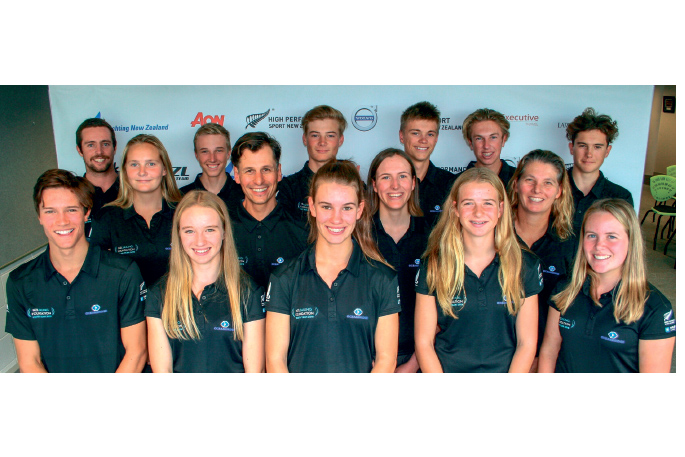 Sydney and her team mates going to the Youth Sailing World Championships.

Over 17,500 kilometres away from home, Taupo sailor Sydney Cunliffe took to the water in Gdynia, Poland in the 48th edition of the Youth Sailing World Championships.

Sydney adjusted her sails to follow the course of these nautical legends, as she competed in the 470 class with youngsters from all over the world vying for the title.

Sailing has always been in the wind for 17 year old Sydney, as she progressed through the smaller boat classes racing on the freshwater of Lake Taupo after visiting the sailing centre when her older brother Malachi had shown an interest.

“I went down with the family and spent time on a support boat and it’s fair to say I caught the sailing bug.”

From that first day, it was clear she wanted to do as well as she could in the sport and with the support of her parents Tyrone and Estie Cunliffe, the dream started to eventuate.

“Mum and Dad are really supportive, whether it’s with sailing, transport, or fundraising. None of this happens without them.

“I’m really grateful for everything they do and their input.”

It became apparent quickly that Taupo was a fantastic spot to start her sailing journey in more ways than one.

“The Lake Taupo Yacht Club is fun; on Saturdays we used to sail over to Two Mile Bay to get ice-creams.

Lake Taupo is a great place to sail, in that as much as we don’t have tides to contend with, the weather can be changeable with wind shifts and sudden changes in conditions.”

Sydney’s mother Estie, was quick to mention her daughters drive to succeed on the water.

“Syd is lightning fast around the boat. She seems to have a feel for where a race is going, rather than being reactive to other competitors or the conditions on the day.

“As long as she’s putting this kind of effort in, we’re more than happy to support her in any way we can to get her to events.”

With it clear Sydney is driven to achieve, it’s fitting her early success in sailing came by way of a class that could easily be named after her determined mindset - Optimist.

The great results started in 2017, with strong performances having her finishing as a Top 10 female finisher across all regatta she sailed in, with a second Oceanian female placing in the Optimist Asian and Oceanian Championships in Hong Kong.

Since then Sydney has sailed in many competitions all around New Zealand from Picton to New Plymouth and over to Tauranga and in plenty of Auckland locations, including Kohimarama where she was recently awarded the ‘Most Outstanding Performance’ at their prizegiving.

Off the water she works hard too - whether it is working at McDonalds to raise sailing funds, training at the gym or at home on her strength and conditioning programme or study commitments. All play a part in the journey ahead, with a lot going on during her final year at Tauhara College in Taupo, with the aim of studying architecture at Auckland University - and no doubt juggling this further study with more sailing.

The training comes in part from High Performance Sport New Zealand, where she received a strength-based program which she does twice a week in-between work and study.

All this history and hard work led Sydney to these world championships in Poland.

“I went into this with no real expectations of how it would go. You don’t know how you compare with other sailors, but obviously you want to do well.”

The result wasn’t as good as she would have hoped, but a lot of learning was, which was in its own way, a great outcome. Sydney took any disappointment with a grain of salt, with the view of possibly going back to compete in 2020 on the cards, with the aim of improving or moving on to bigger things.

These bigger things could, however taking a different tack and switching to the larger 49erFX craft, or to a Nacra multi-hull vessel, and based on her drive to succeed and her ability to learn, the future in these classes looks bright too.

And the ultimate dream?

“I want to sail at the Olympics.”

Considering 470, 49erFX and Nacra are all Olympic category classes should have given this away somewhat…

Based on attitude, outcomes to date and a burgeoning on-the-water knowledge, the future looks bright, and perhaps in time we can add the name of a young lady already making wave sin the sport, Sydney Cunliffe, to this list.