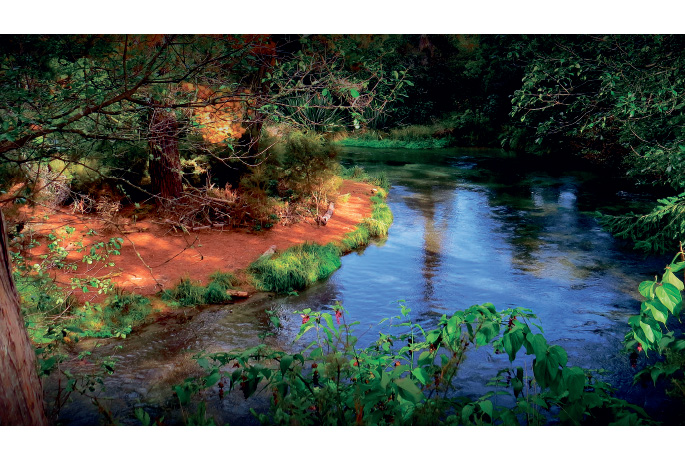 Most anglers new to the Waitahanui, struggle with its uniqueness.

I had more requests to fish or learn the secrets of the Waitahanui than any of the other rivers in Taupo, when I guided.  Every time I fish the Nui, as it is sometimes called, I feel at peace. The meandering  course that it takes, from the Spring it originates from, miles into the bush clad Kaimanawa’s, makes this river relaxing to fish. However when you hook into one of the mammoth trout that lurk in its waters, all hell breaks loose. The calm that once was, is transformed into screaming reels, jumping trout and hoots of adrenalin.

So with that in mind, let me tell you a little story regarding this gem of a river.

When I first started fishing the Waitahanui, Wet Lining was the only form practised. The way you fished it back then was to get above the Pool, or deep run you were fishing, cast your line downstream and then retrieve it back up through the targeted water. The vast majority of my early fishing on the Waitahanui was wet lining Delatours and the Bridge Pool.  Moving downstream from there, you could fish the straight and the groin and of course the rip itself. There was more than enough water to keep me occupied.

Unless you have had a trout take a fly that is fished downstream, you will not know the exhilaration this form of fishing can bring. The fact the line is tight to the fly, (straight line) means you feel the take immediately, sometimes this can be brutal! Once hooked, the fun really starts. As I mentioned, you are above the trout, it is below you in the river and this means you have to bring it back up to you. I have had some epic battles with trout hooked twenty or thirty feet below me and not being able to follow them down stream. Locking up a reel, trying to stop an aggressive trout determined to reach the lake, is pretty damn exciting. Your whole world focuses on the moment at hand.

I had been addicted to trout fishing in Taupo from the age of eight. My Dad and I would travel from Kawerau and then later from Tauranga, as much as his work would allow him. By the time I was 16 I had some decent fish under my belt and had begun exploring the lower reaches up from the Bridge pool to the Cliff pool. This water did not get the attention from anglers like the lower pools did and solitude has always been one of my aims. I had a few deep pieces of water that I liked to fish and generally did well from them. Back in the day, the annual trout fishing contest was open to Rivers as well as the lake. Dad, being a very good wet liner had taken out the prize for best conditioned trout in his first appearance. I was told that the following year he would get me out of school and take me down with him. I think I counted every sleep for a year.

Waders back then were diabolical compared to the joys of today. Skellerup was the best brand and they were like wearing a Onesy in rubber. The day before we left for the competition Dad produced a new pair of waders for me. I had been using old thigh waders and getting wet more often than not. If the trip could have gotten any better it just did! We checked in at the HQ which back then was at Wairakei and then headed to the motel room. We had driven down early as we wanted to have a flick in the river and a look around, before the competition started at 5am the next morning.

Dad went into the Bridge Pool, as was his thing, while I walked into Delatours. The fly of choice back then for me, was the Rabbit. I used this in Green, Yellow and Orange.  My trace was always just a length of mono filament being about eight feet in length. I have changed many things over the years with my wet lining, regarding how I fish it. However the one constant has been the knot I tie a streamer fly on with. For best presentation of a fly being pulled through the water and especially a river, you need a knot that comes straight out from the eye of the hook. If you use a knot like the Clinch, then it has the ability to turn on the eye and make your fly swim lop sided, not looking natural! Dad had been taught the Turtle knot and had passed this little secret onto me. So armed with my selection of Rabbits I fished happily in dry waders.

A favourite saying of Dads was “Stick-ability” If you stuck it out long enough something would have to swim past your fly. I spent years freezing my toes off and having hands like blocks of ice while standing in -5 degrees at 7am on the Waitahanui River because of that bloody saying. However it is true and was one of the many reasons Dad caught so many trout. I on the other hand liked warm body parts and to explore, so on this particular afternoon I reeled up and headed off upstream to have a look see.

There were trout in the river and so I was really excited. I was in the junior section and believed myself to have a more than average chance of taking home a prize. There used to be a piece of water down from Colonel’s Bend that always held trout, especially first thing in the morning. They would swim up the tree covered true left and sit in a small deep pocket of water  away from sight just by the bank. I decided to give it a go.

I only had to cast fifteen feet and then let the current take the rest of the line downstream for me. I waited for it to sink and then started a figure of eight hand retrieve; bringing the fly towards me, very slowly.  I have always found that stopping every foot or so and giving the tip of the rod a little pull backwards can induce a strike. The fur material must “fluff” and create a natural look. On my first cast I had a hit, it was sharp and fast, I missed it. The same thing happened on my second and third casts. It’s small I thought or just nicking the tail of the fly. So taking my cutters I trimmed the tail of the Green Rabbit and sent it back in. This time instead of a hit, I got a thump.

Even though it is well over 35 years ago I can still feel that initial weight as I lifted the rod. It was like trying to drag a wet sack to the surface, then it turned and ran. I crossed the river as it shot down into the next deep piece of water. I kept getting glimpses of silver as I fought to get some control. It smashed its way downstream once again and I stood there on the true right uncertain whether I could follow it down any further.

Everyone knew that going for a swim in waders was dangerous and wading belts were not available back then. “oh hell”  I thought and carefully made my way downstream arm held high and trying to regain some line on my reel.  It wasn’t until I reached School Masters that I managed to slow it down, that is about 400m. I had maximum pressure on it for most of this fight and had fallen in once on my way down.

It wasn’t until I got a good look at it a few feet from the bank that I realised how massive it was. I never used a net back then and so turned parallel with the bank and eased my rod off to the side, gliding it up onto the small bank.   Most of its body was still in the water due to its bulk. The leader would have broken if I had attempted to drag it further. I swooped in on it and moved it onto land. Holy crap! Lying before me was a trout just under ten pound, an amazing example of a Steel head Hen in perfect condition. The nature of the beast back then, was to take fish like that without a second thought and so I dispatched it and made the decision to go back to the car, I was wet through and I wanted to show Dad. The look on his face mirrored my emotions, I was buzzing.

We put the trout in the car and drove back to the motel room. All I could think about was why I had to catch it then and not the day after, for the competition. It was hard to be disappointed and happy all at the same time. Well that is up until it came time to clean and fillet my catch. I mean it should have been mounted but again back then I wasn’t really thinking in that way, it was more about food on the table that I had supplied.

So taking my new incredibly sharp filleting knife I set to and proceeded to gut the fish. While pulling out the stomach contents I knocked the knife off the bench and sent it straight through my big toe, pinning it to the cork tiles. That’s why they make you wear shoes in a kitchen. An hour later I was getting stitches and having a massive bandage applied to my toe. I awoke the next morning with a toe that looked like a large beetroot, throbbing and sore. I tried to get it into my new waders but that wasn’t really an option and walking would have been impossible. For the rest of the competition I hobbled around trying to fish water that I did not have to get wet in. I still have the memory of the trout and I also have a neat little scar on my right big toe to remind me about knife safety. I did manage to win the hard luck story for the competition and got my entry fee refunded.

I have fished the Waitahanui as much as anyone out there and have dropped some great fish in that time, however this one ended up having the last laugh for sure.