Get hooked on jet ski fishing 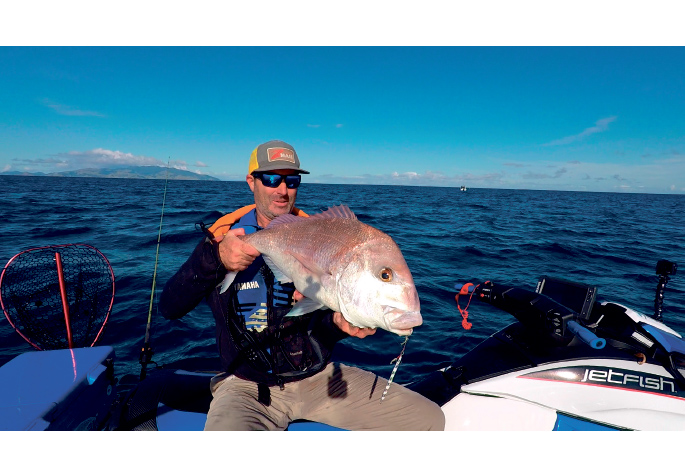 Kirk out fishing and catching a big snapper.

Reeling in a 200kg bronze whaler while sitting on the back of a jet ski proves you don’t need a boat to catch a big fish.

Hefty kingfish, snapper, black marlin and a 100 pound sturgeon are just some of the prize catches that jet ski fishing expert Kirk Davis has hooked while sitting astride his 180 horsepower Yamaha Waverunner FXHO.

Davis’ brand new television series, Jet Fish, will screen on Prime later this year and provides a glimpse into the adventurous world of jet ski fishing.

“The show is about people, places and fishing experiences. We have encounters with whales, we go in caves, we catch nice big fish and we meet lots of people in different parts of the country. There’s some real nice underwater and above water footage and people will learn a lot about jet ski fishing along the way.”

Davis has loved fishing since he was a boy and bought a jet ski eight or nine years ago to encourage his own children to get out on the water.

“If you want to take a young kid out, and they want to come back after 15 minutes, it’s a lot easier to do that on a jet ski than it is on a boat. There’s a lot of preparation that goes into launching, retrieving and washing down a boat.  But with jet ski fishing it’s so easy to do all those things by yourself.”

Reaching top speeds of 100km/hr, Davis’ own jet ski has a range of 160km and offers great fuel economy compared to a boat.

“The difference is you can get closer to the fish and you make less of a shadow in the water so the fish don’t know you’re there. A 5m boat slops around in the water and makes a bit of noise so the fish will scatter. A jet ski is only 3m long and much quieter. You can fish in the shallows, a lot like a kayak, and not scare the fish off.”

Davis’ Yamaha machine is a specific Jet Fish model and boasts a Lowrance 9 inch combo sounder GPS to help find your next catch. “It’s a top-of-the-line GPS fish finder – same as you’d have on a boat.”

On the back of the ski he has a stainless steel ‘Jet Fish Kit’ featuring eight rod holders and a live bait tank. A large glove compartment up front provides ample storage for tackle boxes, soft bait, hooks, line and a good-sized lunch. “You just have to rationalise what you put in there.

“There’s also another big storage area in the front for more clothes and overnight gear. I’ve stayed on Great Barrier Island for the night before and packed a tent plus food and bait. There’s a heap of storage on the ski.”

Davis recommends deciding what sort of fishing you’re going to do before you set out, then packing accordingly so everything’s at hand.

“Jet ski fishing is more about gear handling and what gear you take. In terms of technique, it really just comes down to practice. Landing a fish is a little different because you can’t walk away from it and you haven’t always got someone else there to gaff it for you so it’s just a matter of practising the technique to do that successfully.”

“Jet skis will also fit inside any garage. You don’t have to have extra-long space and you can still fit a car alongside.”

As jet ski fishing is often a solo affair, safety is always paramount. Davis carries a mobile phone, VHF radio and a personal locator beacon (PLB) on him at all times. Your feet are at water level when riding a jet ski and Davis describes the experience as “like sitting on a chair or a motorbike on the water. You can just bend down and touch it.”

Getting so close to the action gives you a unique perspective and a much more intimate experience with marine life.

“Probably one out of every three times I’m on the ski I’ll be cruising with dolphins. They’ll come up right under the bow and you’re so close you could touch them. People pay hundreds of dollars to go on one of those dolphin watching trips but I get that for free.

“A few years back a pod of killer whales was cruising with me for about half an hour. They were stopping to catch sting rays and throwing them in the air.

“I’ve also seen a striped marlin come up under the ski all lit up, chasing some bait that was trying to hide under the ski, that was pretty special too. Jet ski fishing is a wonderful adventure.”