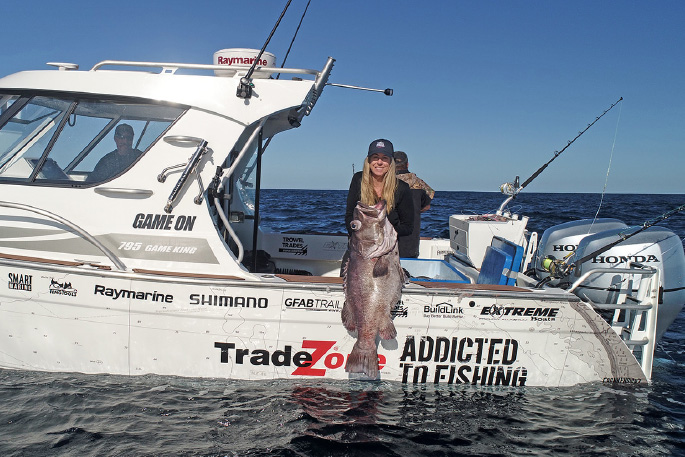 Nicky hauls a bass aboard the Extreme 795 Game King.

Seven years on, the final episode aired in October.

Despite the long hours and challenges that come with creating a TV show, the thrill  of the catch feels the same for Nicky today as it did when she was young, following her uncle Don’s lead to find fish in  Motiti’s shallows.

“Uncle Don has lived on Motiti my entire life and took me out on a little inflatable dinghy as soon as I was old enough to hold a fishing rod,” says Nicky, who is 35. 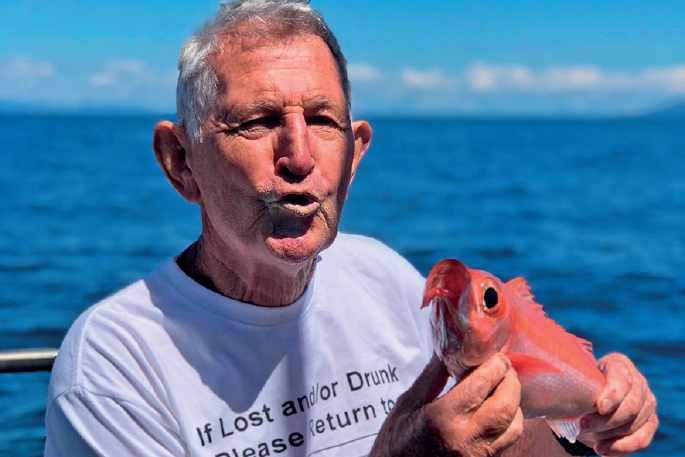 “When I was eight, two of my cousins and I were on Motiti on a particularly stormy day. We saw a shimmer in the breakwater. One cousin hooked it while two of us pulled – we were playing tug of war with a 24 pound snapper.

“It was the most massive fish we’d ever seen and took all three of us to carry it back to the house.

“When we got there I bawled my eyes out because I saw  another fish in the water that I wanted to catch.

“Adult conservationist Nicky isn’t too proud of that story, but my love for fishing has always been there.”

Nicky pays homage to Motiti on the outside of her boat, a Honda powered Extreme 795 Game King, which she uses on the show.

“I have a map of the East  Coast running down the right side of the boat, from the Mount to Motiti.

“I had to show tribute to it somehow. I learned to fish on Motiti, learned to drive on Motiti, had my first kiss on Motiti – it means a lot to me.”

It’s only fitting then that the first two episodes of Addicted to Fishing took place there, which was followed by plenty of travel both in New Zealand waters and overseas.

One of those trips was to Niue, where she stumbled upon a handsome construction worker from Auckland. They’ve now been married for two years.

“We just clicked – and yes, he  loves fishing.

“We spent our honeymoon in Florida and decided to hire a cameraman for the day to film an episode with this amazing fisherman who lives there.”

Nicky is ending the show on a high – ratings are good and she reflects on the last seven years extremely fondly.

That’s not to say there hasn’t been challenges.

Nicky says she is thrown a curveball every season – and the show’s final instalment is no exception.

“I had what’s called a missed miscarriage – we lost our baby but my body hadn’t realised.

“It happened while filming at the end of last year. We made it to the twelve week scan, but the baby had actually died three weeks earlier.”

“Morning sickness already feels like a mixture of being on a boat and having a hangover, so it was pretty crazy.”

Nicky’s resilience proves what she wanted the show to communicate all along: girls can do anything.

“Fishing shows are a very male-dominated space and if girls don’t see women doing it, maybe they’ll assume they can’t.”

She has never let the challenges overshadow the highlights.

One to note is her record-breaking catch in 2017. Nicky caught a 361kg Broadbill Swordfish, which holds the International Game Fishing Association world record for the heaviest broadbill swordfish caught by a female.

“I still pinch myself over that one, I’m so grateful that it happened.”

The show may have come to an end, but Nicky isn’t slowing down.

“I started my working life in marketing and had to continually get sponsors for the show – which is typically the case for fishing programmes.

“After Prime approved the pilot in 2013, I cold-called 1200 businesses. There were many ‘nos’, but I managed to get it off the ground, so I’m excited to do that for others.”

Unsurprisingly, Nicky will still be out on the water whenever she gets the chance.

“It’s going to be hard to shut  me up when I catch a fish, because I’ll revert back to explaining how I did it.

“I’ll miss it, but I’m excited to start a family, being able to attend friends’ weddings, and not waking up at 3am.”