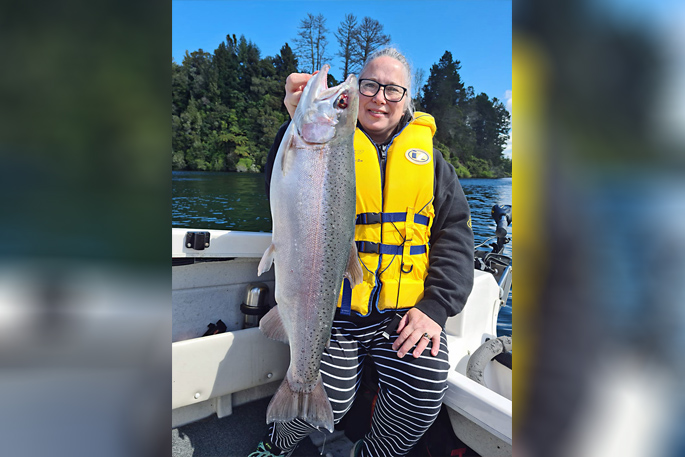 October 1 signalled the start of the 2020-21 trout fishing season, and anglers headed in their masses to the traditional opening haunts on the Rotorua lakes.

Lakes Tarawera, Rotoiti and Okataina were the locations to be at as they reopened following a three-month rest during the winter period.

Tarawera and Rotoiti are the busiest destinations through the opening period as they are highly accessible having a number of boat ramps and the ability to provide a range of attributes from attractive scenery, ready accommodation and the chance of high catch rates and big trout.

This year, Lake Rotoiti shone out with its extremely well-conditioned and large fish. The younger two-year-old trout which are the most catchable through opening and the summer period as they are most abundant ‘legal sized’ fish (>35cm) in the lake, were bigger and heavier than they have been over the last few years.

“The fact that they have improved shouldn’t be understated as they were already the standout fish over the last  few years,” says Fish & Game officer  Matt Osborne.

“Lake Tarawera fell a little short of expectations at the start of the season in both catch rate and fish quality. Even seasoned campaigners found the opening tough. We are expecting fish to improve their body condition through the summer period, and we have received reports of some larger fish (9 pound) being caught through late October.”

Matt points to the winter period being particularly poor for Tarawera, “the spring released hatchery fish of September 2019 were 200g lighter than the same aged fish at the 2019 opening, whereas the autumn 2019 liberation resulted in some nice specimens”. All fish that leave the Ngongotaha hatchery are marked with either a fin clip or a tag that allows Fish & Game to monitor growth within the lakes.

“As we approach the warmer summer months, deeper fishing methods are really going to come into their own across the deep lakes (Rotoiti, Tarawera, Okataina, Rotoma),” says Matt.

A thermocline or area of biological activity formed through temperature layers in the water column will form as the lakes warm with oncoming summer heat.

“Anglers should look to target this  area with deeper methods such as  deep trolling, jigging, soft plastics and downriggers.

“Search with your sounder with high sensitivity settings to find this zone and trout activity,” he says.

“Lake Rotorua has been an absolute  gem over recent summers and we expect the same from it again as we approach the heat of 2021.

“Despite the drought conditions both the rainbow and brown trout that Rotorua is famous for have been in fantastic nick.

This provides great opportunities for fishers at the Awahou, Hamurana, Waiteti and Ngongotaha stream mouths. Brown trout have a trigger temperature of 19 degrees, and when the water reaches this point it is a signal to anglers to head to the inflows especially around dawn and dusk.

Wading may be required but can be done in shorts and wet weather sandals which allows the angler to feel the cooler stream flow from the warmer lake water.

“As normal for this time of year, the browns have already started running in early November, so the peak of the activity will be through mid-December and into the new year,” says Matt.

“The rainbows really start to head into cooler water in early January and are targetable by trollers (shallow trolling with monofilament lines and Tassie devils) 200m off the mouths and by fly and spin anglers from the shore.”

Fish & Game has ‘upped the ante’ at Lake McLaren and the Ruahihi Canal.

The 2019 liberations saw more fish released and a number of tagged fish for monitoring purposes.

“We have also undertaken a ‘trophy trout release’ both in 2019 and 2020 which is a real boon to the local angling community,” says Matt.

“A good number of the big fish from the 2020 event were caught by willing anglers and that’s entirely what we intended.

“We want to see more anglers out there enjoying the resource and getting the young kids into the sport.”

Fish & Game reminds anglers of the need to check their boats and fishing equipment for aquatic ‘hitchhikers’ and adopt the ‘check, clean, drain and dry’ method, especially when moving between different waterways. Bilges, anchor warps and trailers are hot spots for collecting small fragments of weed and can house eggs or small fish such as catfish which are now found in Lakes Rotoiti and Rotorua.

Fishing licences are available online at: www.fishandgame.org.nz and through retail outlets

Ten different licence categories include a Family Licence and One Day Licence. Anglers are encouraged to check their boats and equipment for aquatic pests.