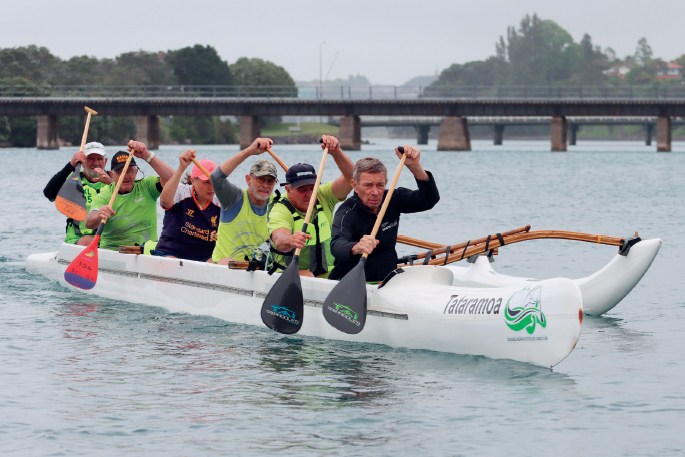 The team, plus a substitute paddler.

When asking Tauranga Moana Outrigger Canoe Club’s oldest crew what the best part about Waka Ama is, the answers range from “being on the water” to “getting a proper coffee afterwards”.

Club member Theo Vale reckons the best part is that it doesn’t matter whether you’re eight or 78, you can get involved.

Theo and his Waka Ama team can certainly attest to the latter – the six members are aged 71-82.

They say it’s a good sport for your lungs and heart without being too harsh on the knees – “that’s important at our age”.

Their age is certainly not holding them back.

The team, who are from throughout the Waikato and BOP, train together twice a week and take on about five river and ocean competitions each year.

They qualified for the 2020 IVF World Club Sprint Championships that were due to be held in Hawaii this year.

The six members met through the Tauranga Moana Outrigger Canoe Club, and have been rowing together for five years since.

With a few breaks in between, each team member has participated in Waka Ama for 6 to 30 years.

While their talent on the water speaks for itself, the team’s age has also brought good fortune.

“In September we participated in 26km race along the  Waikato River from Cambridge to Hamilton,” says Theo.

“We went through a real weather bomb at that competition.

“But Waka Ama is a very safety conscious sport, so we were prepared for it.”

Maurie says that from the spectators to the competitors, everyone involved in Waka Ama is incredibly friendly.

“People come to national competitions at Karapiro just to spectate and enjoy the day – it’s a marvellous atmosphere.”

Theo says the Club is always looking for new members, and anyone – whether you’re eight or 78 – can give it a go.